As I noted earlier this week, Italy hopes to re-implement the migration control provisions of the Italy-Libya Friendship Agreement with a new Libyan government as soon as possible.  This desire is motivated by fears of a new surge in refugees fleeing Libya.  In one of the articles to which I previously linked, Italian Undersecretary for Foreign Affairs Alfredo Mantica also said Italy fears that instability in a post-Qadhafi Libya will lead to increased numbers of Libyans and sub-Saharan Africans seeking to escape to Europe.  Father Moses Zerai, an Eritrean priest who heads the Agenzia Habeshia per la Cooperazione allo Sviluppo, also said in the article that he believes over the short to medium term many sub-Saharan Africans in Libya will likely try to flee to Italy and Europe.  Moses Zerai said that he is in contact with migrants in Tripoli who are fearful of treatment at the hands of the rebels.

Images such as the one below demonstrate vividly why many sub-Saharan Africans in Libya may be fearful of reprisal or harm if they are suspected by rebel forces of being a Qadhafi mercenary.  This picture (Florent Marcie/AFP/Getty Images) was taken on 19 August in Zawiya and reportedly shows “suspected members of the Libyan regime forces [being] rounded up in a pick-up truck by Libyan rebel fighters in Zawiya.” 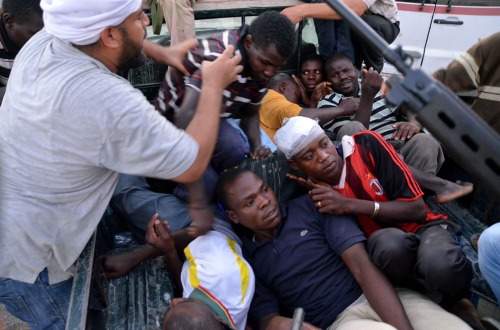