The EU Observer reported two weeks ago that Cyprus “is worried that Syrian refugees could arrive en masse in the island-nation and in the EU more broadly if the conflict gets worse [and that Cyprus] is drawing up plans in case Syrian boat refugees arrive on its coast, a Cypriot source told this website.”  What these plans may consist of is not clear, but during a recent visit to Malta, Cypriot President Demetris Christofias said that Cyprus and Malta shared “’common worries and interests’ over irregular migration … ‘We’re not racists but we must defend the rights of our countries’.”

While it is conceivable that Syrian refugee boats could head for Cyprus if the number of people forced to flee Syria continues to rise, but, as was the case with Libya, most will likely continue to flee across land borders to neighbouring countries and will not take to the sea.  The UNHCR estimates that as of early this month, over 81,000 people have fled to Jordan, Lebanon, Turkey and Iraq and that there are approximately 400,000 internally displaced persons within Syria.  To the extent that some may flee Syria by sea, the portion of the island of Cyprus closet to Syria is the northeastern area which is controlled by Turkey. 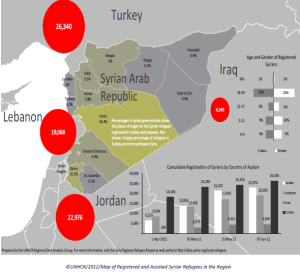