From an EU Press Release:  “…  The EU also stands ready to resume negotiations on a Framework Agreement which can serve as a basis for political, economic, social and cultural dialogue and cooperation with the new Libya, whenever the new authorities decide that is the right moment to do so. The same principle applies to the possibility of having Libya joining regional initiatives where the EU is involved….”

“…Beyond tackling the most pressing humanitarian needs, the EU is already preparing both immediate measures to support the stabilisation priorities of the National Transitional Council (NTC), as well as longer-term support programmes. It was agreed at the international conference in Paris on 2 September 2011 that the EU will conduct needs assessment for the following sectors: border management; strengthening civil society and women’s rights, and media/strategic communications, while the UN and the World Bank, with which the EU is working very closely, will lead assessments in other areas. In addition, the EU has already deployed experts in communications, civil society, border management and security, and procurement.   In addition to its humanitarian assistance, the European Commission can make up to €30 million available for immediate stabilisation needs, including through the re-activation of programmes in the field of migration that were suspended when conflict began….” [emphasis added]

Thousands of Refugees Stranded in Misrata

ICRC expressed its concern over the situation in Misrata where six to seven thousand foreign migrants and refugees are stranded and living in the open. The city is completely surround by Gaddafi forces.  An ICRC delegation was able to enter the city over the weekend to deliver humanitarian supplies.

“Michael Mann, spokesperson for EU foreign policy Chief Catherine Ashton, said [last week before the ICRC delegation arrived in Misrata] that a decision adopted on 1 April allowed the EU to use military equipment for a humanitarian operation [to evacuate civilians] in a situation such the one in Misrata.  ‘We can launch this as soon as we receive a request from OCHA,’ the UN Office for the Coordination of Humanitarian Aid, Mann said.”

I can’t figure out how to post a legible chart, you therefore need to view the chart on the EEAS web site (click here) to fully comprehend (if possible) the organisational structure of the EEAS.  Presumably this is a work in progress. 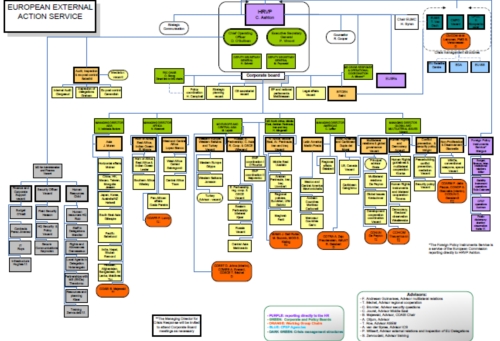 A statement released today by EU High Representative Catherine Ashton at the conclusion of her meetings in Egypt includes the following:

“Regarding specific action on Libya, we are looking forward to the meeting of UN Security Council. It will address the situation in Libya later today and will discuss all options, including restrictive measures. For my part, I have called a meeting of EU Ambassadors to look at what the European Union can do to support the UN and what measures it can take. As the situation stands, we have suspended negotiations on EU-Libya Framework Agreement. We are coordinating closely with Member States in Brussels, in New York and in Geneva at the UN Human Rights Council, where I will be myself on Monday.”

EDA Report on Maritime Surveillance in Support of CSDP

The “Wise Pen Team” Final Report to the EDA Steering Board on Maritime Surveillance in Support of the Common Security and Defence Policy (CSDP) was released on 26 April.

The EDA Press Release states: “the Ministerial Steering Board received the report of the Wise Pen Team of five retired admirals on Maritime Surveillance in support of CSDP. The central message of the report is the need for linking national and international military and civilian assets in order to create a federated maritime surveillance network. The report contains concrete recommendations and will provide an important contribution to the activities on Integration of Maritime Surveillance, led by the European Commission.  ‘The Wise Pen Team’s report has already had a major impact. It has brought different actors together, civilian and military, which will be crucial for developing effective Integrated Maritime Surveillance’, Catherine Ashton stated. She added: ‘My dual-hat capacity as High Representative and Vice-President of the Commission has exactly been created to realise the synergies we need in the EU between the civilian and military sides in areas like Maritime Surveillance.’”

Executive  Summary: “[***] Increasing maritime insecurity, not least terrorism, piracy and illegal immigration, has highlighted the need to improve European security by integrating maritime policy making, sharing information more effectively and transparently and coordinating a collective response to security challenges. Many useful initiatives are already underway, but there is the need to make graduated improvements in co-ordination and integration which are affordable and not technologically difficult. [***]”

I have not attempted to read this 50+ page document yet, but it may of interest to some.

Here is the Table of Contents: