Tunisian authorities continue to recover the bodies of victims from the migrant boat that capsized off the coast of the Kerkennah islands  last week.  TAP reported that 26 additional bodies were recovered on Sunday, 5 June.  Poor weather conditions on Sunday made recovery operations difficult.  According to TAP, 577 persons were rescued from the boat and 200 to 270 persons are believed to have drowned.  There are conflicting media reports regarding the numbers of confirmed deaths.  Some reports indicate that at least 150 bodies have been recovered in addition to the 26 bodies reportedly recovered on 5 June.

The boat, named The Wave, ran around last week, probably on Wednesday, 1 June.  The boat did not capsize until after rescue boats had arrived on the scene.   Tunisian coast guard and local fishing boats were involved in the rescue efforts.  The rescue boats did not have the capacity to rescue all of the migrants from the stranded migrant boat and some people jumped into the water and others moved to one side of the migrant boat causing it to capsize.  Media pictures show the vessel in an upright position with some rescue boats already on scene.  A France24 video report contains cell phone video shot immediately after the boat capsized.  (See pictures below.)

UNHCR and IOM staff have conducted interviews with some of the survivors.  According to UNHCR, the boat left Tripoli on 28 May with up to 850 people on board.  The passengers were primarily from West Africa, Pakistan, and Bangladesh. The crew was recruited on an ad hoc basis and had little or no maritime experience. The France24 video report states that survivors said Libyan military assisted them in leaving Libya.  The boat became lost after leaving Tripoli and on Wednesday, 1 June, it ran around near the Kerkennah islands.  UNHCR spokesman Adrian Edwards said that the boat “capsized as desperate passengers rushed to one side, seeking rescue by the Tunisian coast guard and fishing boats that had approached the vessel. Many fell into the water.”  IOM staff reported that at least one survivor said that during the boat’s voyage some people were thrown overboard alive.  The boat reportedly had run out of food and water.

Click here and here for UNHCR reports on the incident. 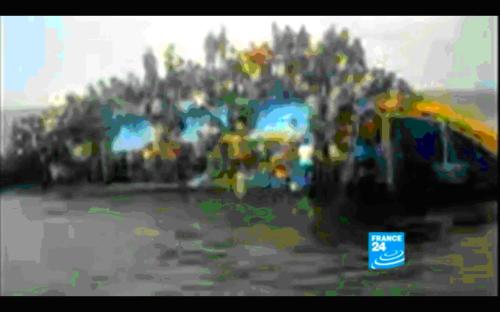 62 Bodies Recovered on Tunisian Beaches in First Week of May

While irregular departures from Tunisia have been significantly reduced in number since Tunisian authorities resumed efforts to prevent or discourage such departures, bodies from earlier departures and accidents continue to wash ashore.  The Financial Times reports that “62 bodies [were] found [during the first week of May] near Sfax, Kerkennah and Chaffar, up the coastline from Zarzis, apparently from boats lost weeks earlier.”  58 bodies were discovered during the month of April.  FT also reported that “[u]nder the previous regime, would-be illegal migrants risked a fortnight in jail for ‘infringement of frontiers’; now there are no penalties imposed on those who attempted the illegal crossing.”

The Tunisian Interior Ministry released a communiqué reporting that authorities during the month of April recovered a total of 58 bodies that had been washed ashore.   The bodies were mostly those of men and were found along beaches in Skhira, Chaffar, and Kerkennah, in the department of Sfax, and in Gabès, Djerba, and Mahdia.  The dead are believed to be persons who attempted to reach Italy by boat.

Family members of missing Tunisian migrants held a sit-in at the Tunisian Ministry of Foreign Affairs on Monday of this week.  They are seeking assistance in learning the fate of their family members who left Tunisia by boat for Italy and who have not been heard of since their departures.  Among the missing are 40 migrants who left from Sfax on 14 March and a second group of 80 who left on 29 March.  Some of the families say that they have received reports that the migrant boats may have landed in Libya and not Italy.