The Somaliweyn Website reported that Puntland authorities have arrested over 100 intending migrants:

“‘The exact number of the people whom we have arrested is 110, and they are from different nations in Africa, but the leading numbers of the people are from our immediate neighbour Ethiopia, the entire of these people were intending to cross the wide waters between Yemen and Puntland state, and just before they have accomplished their dreams they were apprehended by our security personnel’ said Musse Ahmed Abdurahman the police commissioner of Puntland state speaking to Somaliweyn Website via the wire. The Police commissioner has also added that lately the number of the persons intending to illegally cross the water between Yemen and Puntland has been rapidly mounting….”

IRIN reported: “‘We have begun to force would-be migrants back to their homes for their own safety. I would rather have them back in their homelands than dying at sea,’ said Muse Ghelle Yusuf, governor of Puntland’s Bari region. He said thousands of Ethiopians and Somalis are currently in Bosasso, the commercial capital of Puntland, intending to cross into Yemen.
‘Our estimate is that as of today [29 December 2009] there are 4,000-5,000 migrants in and around Bosasso,’ Yusuf said, noting that 1,000-1,700 have been arriving in the area daily.”

“We’re standing on a beach in southern Yemen, early one November morning. On the opposite side of the Gulf of Aden lies the Horn of Africa, one of the most troubled regions on earth, racked by civil war and poverty. Those who can pay for their way out, make their way to Yemen. Seventy dollars buys them a spot on the next boat out. Many are beaten on the way, sometimes women are raped, and all too often – passengers drown. Those who reach Yemen will have to start a new life from scratch. The sea is calm this morning, it is high season for illegal boats crossing into Yemen. Last night, we heard a motor boat travelling parallel to the beach. There was no light, no noise on board except for the engine: probably a smuggler using the cover of night to carry his human cargo….” 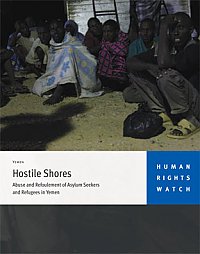 Human Rights Watch has issued a new report detailing the treatment refugees arriving in Yemen from the Horn of Africa.

“This report documents the harsh treatment of refugees traveling to Yemen and calls on the Yemeni government to stop systematically arresting Ethiopian asylum seekers and forcibly returning them home. The 53-page report also calls on the United Nations High Commissioner for Refugees (UNHCR) to put more pressure on the Yemeni government to meet its obligations toward all asylum seekers and refugees.”

The UNHCR released its most recent estimates of the numbers of Africans who have crossed the Gulf of Aden and Red Sea to Yemen in 2009.  UNHCR believes over 74,000 people made the crossing which is estimated to be a 50% increase over last year.

“According to the latest UNHCR statistics, at least 309 people drowned or did not survive the trip this year. In 2008, some 590 people died during the crossing. Many more people went missing and are presumed dead. The mixed migration route through the Gulf of Aden and the Red Sea is presently the busiest and the deadliest one in the world.”

“While virtually all arriving Somalis approach the two, strategically positioned reception centres in Mayfaa and Ahwar, where they receive protection and assistance, only some 9,000 Ethiopians went to these venues this year. Most press on towards the Persian Gulf states in search of job opportunities.”

The UNHCR estimates that over 50,000 migrants in approximately 994 boats have crossed the Gulf of Aden from Somalia to Yemen so far this year.  UNHCR says there has been a 50% increase in crossings compared with the same period last year.  September and October are usually the busiest months due to favourable sea conditions.

UNHCR has issued a new warning about the steadily deteriorating situation in Somalia that is forcing thousands of Somalis to flee fighting.  250,000 Somalis have been forced out of their homes in Mogadishu since May, many are seeking shelter in internal camps and in neighboring countries.

UNHCR spokesperson Andrej Mahecic said that “[u]sing unscrupulous smugglers, thousands risk their lives and take the perilous journey across the Gulf of Aden and the Red Sea to reach Yemen or the Mediterranean Sea to get to Europe”.

“So far this year over 900 boats carrying around 47,000 people have attempted to get to Yemen from the Horn of Africa, with 322 people drowned or presumed dead, and just last week 16 people died and 49 others are thought to have drowned in the Gulf of Aden.”

Click here for UNHCR statement and here for article.

UNHCR Reports 65 Dead or Missing in Gulf of Aden (News)

The UNHCR reports that at least 16 migrants are dead and 49 others missing and presumed dead in the Gulf of Aden in three separate incidents over the past two days.

In one of the incidents a Belgian warship on an EU anti-piracy patrol rescued 38 migrants from a sinking boat.  The Belgian ship disembarked the survivors at the Yemeni port of Mulkalla.