Belgium announced earlier today at the conclusion of the JHA Council meeting that it plans to reintroduce border controls, joining France and Germany, in an effort to block the entry of Tunisian migrants granted temporary residency by Italy.  The announcement was made by Melchior Wathelet, Secretary of State for Asylum and Migration. Wathelet also suggested that Austria and the Netherlands , as countries of “final destination,” were supportive of the move to reintroduce border controls within the Schengen Area.

Excerpt from the conclusion:  “Apart from criticizing Greece for the current conditions of detention and subsistence awaiting asylum seekers, and Belgium for ‘intentional blindness’ for failing to properly scrutinize the adequacy of protection against refoulement in Greece, despite the fact that circumstances had called for application of the sovereignty clause, the Grand Chamber’s judgment exposes flaws in the current European asylum regime.

The judgment acknowledges … challenges [posed by CEAS and the Dublin regulation], yet underlines that neither uneven burden-distribution (Greece) nor a state’s minimalist reading of the Dublin Regulation (Belgium) absolves Member States of their responsibilities vis-à-vis the Convention or other applicable international treaties, including the 1951 Refugee Convention. As long as the EU and CEAS are comprised of individual Member States, as opposed to a ‘United States of Europe,’ individual states will be held responsible for independently assessing each case for the risk of direct or indirect refoulement.   While the Grand Chamber judgment uncovered a number of deficiencies in the current European asylum system, solutions to CEAS may have to be found outside the ‘Dublin world.’”

Of possible interest to a few, here are two links to the portions of yesterday’s plenary session of the European Parliament where the Common EU Asylum System and the migration emergency in Italy were discussed by a few MEPs and Commissioner Malmström.  As you can see from my screen shot below of the debate regarding the migration emergency, very few MEPs were in attendance. 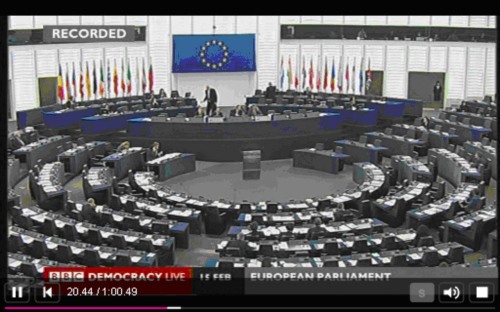 ‘While the M.S.S. v. Belgium and Greece judgment is only against two member states, the implications of the judgment will be rippling through the capitals of Europe,’ he added. ‘The myth that European Union member states are safe places to return asylum seekers has been exploded by the European Court of Human Rights.’

The President stated that the Court had found massive deficiencies in detention conditions in Greece and in the procedures and remedies designed to safeguard the rights of asylum seekers, refugees and irregular migrants in Europe. He commented that Greece was not alone in failing on detention safeguards and that the Assembly had recently addressed recommendations to all member states on steps to improve detention facilities in Europe.

‘What is also clear from this judgment is that the so-called EU ‘Dublin system’ for determining the state responsible for deciding an asylum decision has to be changed as a matter of urgency. It is based on the false premise that EU member states are all safe and able to cope. They are not, and the ‘Dublin system’ creates enormous burdens on front-line states, such as Greece,’ the President declared.

He called on the EU to work with the Council of Europe, UNHCR and others, to solve the problem of returns under the “Dublin system” and reiterated a concern repeatedly highlighted by the Assembly that Europe needs to make its asylum systems fairer (see PACE Resolution 1695 (2009)) and needs clear rules on detention of irregular migrants and asylum seekers (see PACE Resolution 1707 (2010)).

‘Europe has European Prison Rules applying to criminals, but we still do not have similar rules for irregular migrants and asylum seekers who have committed no crime,’ he concluded.”

The Grand Chamber of the European Court of Human Rights issued a decision today in the CASE OF M.S.S. v. BELGIUM AND GREECE (Application no. 30696/09) (also FR) and concluded that Belgium should not have returned an Afghan asylum seeker to Greece under the Dublin II regulation which mandates that asylum claims are to be considered in the state where the asylum seeker first entered Europe.

This is the first decision from the ECtHR addressing the application of the Dublin II regulation.  According to European Voice, the “Court [currently] has around 960 cases pending that relate to the Dublin regulation, against the Netherlands, Finland, Belgium, the United Kingdom and France, most of them concerning expulsions to Greece.”

I have not had a chance to read the decision closely yet, but here is some basic information about today’s decision (more to follow in a subsequent post):

Excerpts from the Court’s Press Release (click here for FR):

“In today’s Grand Chamber judgment in the case M.S.S. v. Belgium and Greece (application no. 30696/09), which is final, the European Court of Human Rights held, by a majority, that there had been:

A violation of Article 3 (prohibition of inhuman or degrading treatment or punishment) of the European Convention on Human Rights by Greece both because of the applicant’s detention conditions and because of his living conditions in Greece;

A violation of Article 13 (right to an effective remedy) taken together with Article 3 by Greece because of the deficiencies in the asylum procedure followed in the applicant’s case;

A violation of Article 13 taken together with Article 3 by Belgium because of the lack of an effective remedy against the applicant’s expulsion order.”

ECRE released a statement describing the decision as a “major blow to the Dublin system.”  Excerpts from the ECRE statement:

“Bjarte Vandvik, ECRE Secretary General, stated: ‘This judgment is a major blow to the Dublin system. The assumption that all EU Member States respect fundamental rights and that it is therefore safe to automatically transfer asylum seekers between EU countries no longer stands. Europe must seriously rethink the Dublin system and replace it with a regime that ensures the rights of asylum seekers are respected’.

This judgment will affect many asylum seekers in Europe. In 2010 alone, EU countries requested Greece to examine the applications of almost 7,000 asylum seekers who had entered the EU through Greece. Their situation will now need to be re-examined in light of this ruling.

Bjarte Vandvik [also] stated: ‘European countries must comply with the Court’s ruling, stop sending asylum seekers back to Greece, and examine asylum applications themselves until a fair asylum system is in place in Greece’.

The Dublin system fails refugees and Member States and needs to be changed.  This ruling reflects the serious shortcomings in the asylum procedure in Greece and in Belgium and it also highlights the flaws in the Dublin system itself. ECRE has long stressed that Dublin shifts responsibility for asylum seekers to states at Europe’s frontiers. Also, it allows refugees to be sent back to European countries where their fundamental rights are not respected.

As a first step in the right direction, ECRE supports the Commission proposal to review the Dublin Regulation, as it introduces significant humanitarian reforms and important procedural safeguards. For example, the proposal makes it easier for asylum seekers to join family members living in Europe, protects the rights of children who have arrived alone and ensures the continuity of care for vulnerable persons.

However, these are only temporary measures that do not solve the sometimes devastating impact of the Dublin system on asylum seeker’s human rights. Ultimately the Dublin Regulation should be abolished and replaced by a more humane and equitable system that considers the connections between individual asylum seekers and particular Member States.”

Click here for full ECRE Statement on the decision.

UNHCR Reports 65 Dead or Missing in Gulf of Aden (News)

The UNHCR reports that at least 16 migrants are dead and 49 others missing and presumed dead in the Gulf of Aden in three separate incidents over the past two days.

In one of the incidents a Belgian warship on an EU anti-piracy patrol rescued 38 migrants from a sinking boat.  The Belgian ship disembarked the survivors at the Yemeni port of Mulkalla.