NY Times: The Outlaw Ocean Series – Stowaways and Crimes Aboard a Scofflaw Ship

The first instalment of a four part NY Times series, The Outlaw Ocean, by Ian Urbina was published yesterday. The 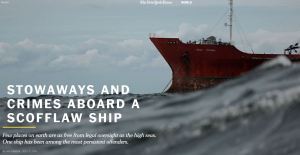 first instalment, Stowaways and Crimes Aboard a Scofflaw Ship, follows the activities of one particular ship, including an incident where two stowaways were forced overboard and left adrift on a makeshift raft while the ship was at sea off West Africa. From the NYT: “The Outlaw Ocean series was a deep collaboration, with many parts of the newsroom working with Ian Urbina on a quest to reveal lawlessness on the high seas. The hope for the project was to take readers inside that lawlessness, using video, photography, mapping and design tied closely together.”