Today, 26 August, marks the ten year anniversary of the beginning of the Tampa affair in Australia.  On 26 August 2001, the Norwegian cargo ship Tampa responded to a distress call issued by the Australian Rescue Coordination Centre and rescued over 430 Afghan asylum seekers from a sinking migrant boat.  Australian Prime Minister John Howard’s government refused to permit the Tampa to offload the rescued asylum seekers on Christmas Island, the closest place of safety.  After a several day stand-off, the Tampa’s captain declared an emergency and entered Australian territorial waters.  Australian SAS special forces boarded the Tampa and took control of the ship.  The asylum seekers were eventually transferred to a naval vessel and sent to Nauru where they were detained.  The incident marked the beginning of Australia’s so-called Pacific Solution policy.

Here is an excerpt from UNHCR’s 2006 State of the World’s Refugees report describing the incident:

“A recent renowned rescue at sea was carried out by the Norwegian merchant ship Tampa in August 2001. Sailing from Perth, Australia under the command of Captain Arne Rinnan, the freighter of the Wallenius Wilhelmsen Line received a call for assistance from the Rescue Coordination Centre of the Australian Maritime Safety Authority. The Tampa changed course and was guided by an Australian coastal search airplane to reach an Indonesian boat crowded with passengers and in acute distress. The boat was breaking up in heavy seas as the Tampa arrived just in time to transfer the 433 people on board to its own decks. The Norwegian ship had facilities on board for only 50 people, including its crew of 27.

The closest port to the site of the rescue was on Christmas Island, an Australian territory, but Australia’s Immigration Department forbade the Tampa to enter Australian territorial waters. The Australian government was determined to stop unauthorized arrivals of asylum seekers, and so refused to disembark the Tampa‘s passengers and permit the vessel to proceed on its scheduled route. After long and tense negotiations – during which conditions on board the Tampa reached crisis proportions – a complicated and costly arrangement saw the passengers forcibly removed from the ship and dispersed to camps in Nauru, a small state nearby. Some 132 unaccompanied minors and families were accepted by New Zealand, where almost all received refugee status. None went directly to Australia. In this long process, the owners and agents of the Tampa incurred substantial losses.

At the time, the obligation to render assistance to vessels in distress was codified in international maritime law in such instruments as the UN Convention on the Law of the Sea (1982) and the International Convention on Maritime Search and Rescue (1979). The obligation to extend aid applies without regard to the nationality, status, or circumstances of the persons in distress. Under these rules, ship owners, ships masters, coastal nations and flag states (the states where ships are registered) all have responsibilities for search and rescue.

The International Convention on Search and Rescue mandates that a rescue is not complete until the rescued person is delivered to a place of safety. That could be the nearest suitable port, the next regular port of call, the ship’s home port, a port in the rescued person’s own country, or one of many other possibilities. The convention provides that ‘a situation of distress shall be notified not only to consular and diplomatic authorities but also to a competent international organ if the situation of distress pertains to refugees or displaced persons.’ The ship itself cannot be considered a ‘place of safety’ – indeed, carrying a large number of unscheduled passengers could endanger the crew and passengers themselves, owing to overcrowding, insufficient food and water and the tensions of life at close quarters.

The inability to disembark rescued passengers in a timely fashion and return to scheduled ports of call lead to strong reluctance in the maritime industry to engage actively in search and rescue missions. For their principled actions in the face of such profound disincentives, in 2002 UNHCR gave the captain, crew and owner of the Tampa its highest award, the Nansen Refugee Award.

The Tampa affair helped focus international attention on the question of who has responsibility for accepting asylum seekers rescued at sea, adjudicating their claims, and providing a place of safety for those who are confirmed in their need for international protection. In 2002, the general assembly of the International Maritime Organization (IMO) adopted a resolution seeking to identify any gaps, inconsistencies and inadequacies associated with the treatment of persons rescued at sea. IMO solicited the input of a number of UN agencies in a search for a coordinated approach to the issue.

The amendments impose upon governments an obligation to cooperate to ensure that captains of ships that have rescued persons in distress at sea are released from their obligations with the minimum further deviation from the ship’s intended route. The government or party responsible for maritime safety and rescue where survivors are recovered is responsible for ensuring that a place of safety is provided. The guidelines, on the other hand, aim to help governments and masters of ships fulfil their legal and humanitarian obligations to persons rescued at sea.”

Click here for Wikipedia entry on the Tampa Affair.

Click here for UNHCR 2006 State of the World’s Refugees report. 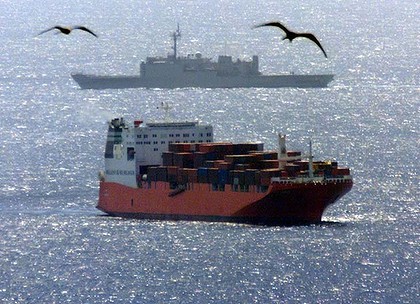 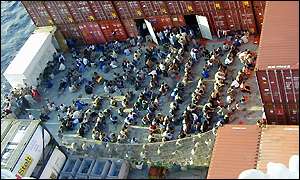