UNHCR today released more information from three Ethiopian survivors of the migrant boat that left Tripoli on 25 March with 72 passengers and which, after becoming disabled and running out of food and water, washed ashore in Libya over two weeks later with only nine survivors.

Additionally, the Bruxelles2 blog in a recent post, “Un navire de réfugiés non secouru ? Retour sur un drame non élucidé,” has provided detailed analysis regarding the possible identities of the helicopter and warships that failed to render assistance to the migrant boat after it had become disabled.  (See more on this below.)

“[One surviving] refugee said that military vessels twice passed their boat without stopping, and that a military helicopter dropped food and water onto the boat at some point during the journey. The first boat refused their request to board. The second only took photos, he said. The man was not able to identify where the vessels came from.

UNHCR staff met with the three in Shousha camp in Tunisia. One spoke Arabic, while the others spoke Oromo. UNHCR interviewed the Arabic speaker. He said that they paid smugglers US$800 to make the journey. The passengers were expected to operate the boat on their own.

According to the refugee, when water ran out people drank sea water and their own urine. They ate toothpaste. One by one people started to die. He said that they waited for a day or two before dropping the bodies into the sea. There were 20 women and two small children on board. A woman with a two-year-old boy died three days before he died. The refugee described the anguish of the boy after his mother’s death.

After arrival on a beach near Zliten, between Tripoli and the Tunisian border, a woman died on the beach from exhaustion. The remaining 10 men walked to the town of Zliten where they were arrested by the Libyan police. They were taken to a hospital and then to a prison where they were given some water, milk and dates. After two days another survivor died.

After begging jail staff to take the remaining survivors back to hospital, they were taken to a hospital in al-Khums city. Doctors and nurses were said to have given the group water and told them to leave. They were returned to the prison and then taken to Twesha jail near Tripoli. Finally Ethiopian friends in Tripoli paid the prison US$900 to release the men. UNHCR is now providing them with assistance in Tunisia.”

Bruxelles2 notes that the survivors’ reports that the helicopter that dropped supplies had an “Army” marking on it would tend to suggest that the helicopter did not belong to France (“Marine”), Italy (“Marina”), the U.S. Navy (“Navy”), or the Royal Navy (“UK Navy”).  Bruxelles2 believes it is plausible that an “army” helicopter belonging to the US or UK could have been operating in the area, but US Army helicopters tend to be marked “United States.”  According to Bruxelles2 some British army helicopters do carry the “Army” marking.  (One other possibility I would note is that the survivors could simply be mistaken about the marking – they recall clearly that a military helicopter hovered over them and dropped supplies, but incorrectly remember, misread, or assumed that the marking on the side of the helicopter said “Army”.)

Bruxelles2 also suggests that there are other warships that might appear to be an aircraft carrier, especially when viewed from a small migrant boat.  Bruxelles2 points in particular to “the USS Kearsarge (LHD3), [an] amphibious ship [that] regularly hosts (and welcomed during the operations – which the U.S. Navy confirms) AV-8B Harrier vertical takeoff [aircraft].”

Bruxelles2 also notes that the time period when the migrant boat was disabled and drifting was a period when there was a shifting of commands for the multiple European and US naval and air forces operating off Libya.  NATO took command of the maritime embargo on 23 March; the no fly zone and the air attacks were initially under the control of an ad hoc coalition (France, UK, USA, Canada, Belgium, Denmark); full command did not shift to NATO until 31 March and even then it took several days for the transfers of command to occur; and some military vessels continued (and continue to this day) to operate under independent national command.

In short, NATO may be fully correct when it says that a vessel under its command during the time period in question did not encounter the disabled migrant boat.  Further investigation into responsibility is needed. 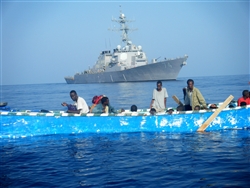