Deaths at Sea at Europe’s Other Southern Border – Mayotte

Five persons, including three children, are confirmed dead, and at least 15 are missing and presumed dead after a small boat (known locally as a “kwassa-kwassa”) sank off of the French island of Mayotte on 19 May.  19 people were rescued.  The boat sank after striking a coral reef.  The boat was attempting a 100 km voyage from the island of Anjouan in the Union of the Comoros to the French island of Mayotte.  Approximately 200 people each year are believed to die attempting to make the 100 km voyage from the Comoros to Mayotte.

Mayotte, which is located off the coast of Mozambique and is geographically part of the Comoros Islands, became an Overseas Department of France in March 2011.  The French government estimates that 40% of Mayotte’s population is without legal immigration status.  According to a Reuters article, in 2011, “there were some 1200 applications for asylum in Mayotte, 41 per cent more than in 2010. The largest proportion of applicants came from the Union of the Comoros (90 per cent), with citizens from the Democratic Republic of Congo, Madagascar, Rwanda and Burundi, accounting for the rest. Last year some 20,000 people, including failed asylum seekers, were sent back from Mayotte to the Union of the Comoros and Madagascar.” 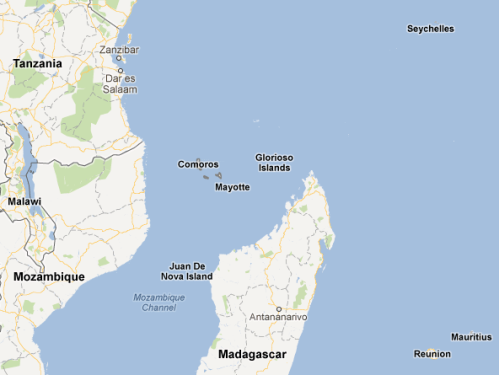